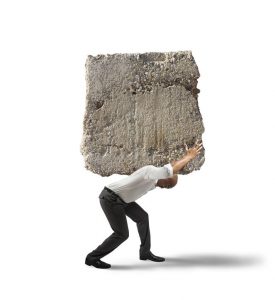 The other day I was working with one of my Alexander Technique students, showing her how she could stand with ease.  Like a great many people, she had a habit of pushing her upper torso back and her pelvis forward a bit as she stood.

As I gently guided her out of that pattern and into a different, and totally unfamiliar way way of standing – one in which she initially felt she was pitched too far forward – she exclaimed: “I feel like I just dropped a huge burden!”

As the late Marjorie Barstow would often say to students in a similar situation, “What you’re feeling is the absence of tension in your body”.

What’s going on is a shift away from using muscular effort to hold oneself and instead  intelligently utilizating of our built-in capacities to be easily upright – head balanced on top of our spine, torso balanced on our hip joints, legs balanced at our ankles, and the effective use of the basic forces of the earth.(1)  Of course some effort is still needed to stand, but far, far less than before.

Substituting balance for effort can be a challenge at first, not just because it feels so strange, but also because we often have a built-in bias towards using our muscles – instead of our thinking – to make changes that will cause us to feel “right”.

As F. Matthias Alexander, the developer of the Technique, said: “We are so brutalized by our belief in doing and muscular tension.”(2)

Letting go of that false belief lies at the heart of “Laying your burden down.”

(1) You can learn more about these forces and how we can make the best use of them here.

(2) Here is Alexander’s full quote on this topic: “The trouble is none of my pupils will believe that all they need to do is to think and that wish for the neck to be free will do the trick.  I can now with my hands make any alternation in anyone, but none will trust to the thought. We are so brutalized by by our belief in doing and muscular tension.” – from Training with F. M, a diary of Sir George Trevelyan, a student on Alexander’s first teacher training course. This quote comes from the period 1933-1934.