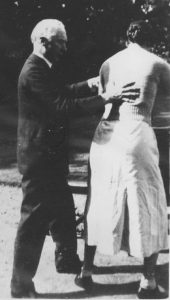 In my last blog, The F. Mathias Alexander Story – It Ain’t Necessarily So, I wrote that I consider F. Matthias Alexander to have been a genius – but  a very different kind of genius that we have been led to believe.

He was certainly not the lone genius, who after working on his own for 10 years, came up with the powerful method of self improvement we today call the Alexander Technique.

It’s now abundantly clear that most, and perhaps even all, of his teaching procedures were borrowed from others. Far more importantly, even some of the Technique’s basic principles came from the work of Francois Delsarte. (Information about the Alexander/Delsarte connection)

Near the end of that blog I wrote:

In my opinion, Alexander’s true genius lay to some extent in solving his problem using the version of the Delsarte Method he has access to.  But even more in packaging, popularizing and teaching it, and later adding some new components – notably what are now called Alexander Technique Directions, and the use of his hands to both guide his students and reinforce the ideas he wanted to get across to them.

I’ve had a good response to that blog, including some very incisive comments via email from teachers and students. Some of those comments have caused me to rethink what I consider the true nature of Alexander’s genius.

As I see it now, Alexander did something else that in it’s own way may be even more important than packaging, popularizing, teaching, and adding.

That “something more” is his roughly 60 years of taking his and others’ discoveries on the road, so to speak.

That’s a very long time for one person to stay fully committed to a single project. And it’s also worth noting that several of Alexander’s early trainees – his brother Alfred Redden Alexander, his niece Marjory Barlow, Walter Carrington, Margaret Goldie and Patrick MacDonald, among several others, spent most of their lives teaching and further developing the Technique.  Marjorie Barstow, the first person to graduate from Alexander’s first teacher training course, devoted herself to the work for over 60 years.

Clearly Alexander was a very special kind of inspirational genius and this, coupled with his own and his disciples’ dedication, over the years, led to a huge expansion in the Alexander Technique community of teachers and students. Furthermore there is now a significant amount of scientific and medical research, many excellent books, videos, websites, articles etc.

And of course it’s become much easier to find an Alexander Technique teacher today.  In the mid 1970s, when I discovered the Technique, there were 2 teachers in all of Canada, and a several dozen in the rest of the world.  Today, there are dozens of teachers in Canada, and thousands elsewhere.

But Alexander wanted more than just increased size and scope. In the Introduction to Alexander’s fourth and final book, The Universal Constant in Living, Alexander wrote:

After working for a lifetime in this new field I am conscious that the knowledge gained is but a beginning…my experience may one day be recognized as a signpost directing the explorer to a country hitherto ‘undiscovered,’ and one which offers unlimited opportunity for fruitful research to the patient and observant pioneer.

And indeed since Alexander’s death in 1955, there have been several developments that have built on Alexander’s “beginning” – just as he hoped.  Among these I would include ways of working with groups, developed by Marjorie Barstow, that went beyond Alexander’s own group teaching process, Body Mapping, incorporating a clearer understanding of the external forces that operate on our bodies, and perhaps most important of all, huge improvements in Alexander Technique Directions.

And anyone who has been following today’s interactive exchanges on the web among Alexander teachers and students from around the world can clearly see, these kinds of positive developments are continuing at a steady pace.

Finally, let’s not forget that relatively early in his teaching career, Alexander had another – and somewhat different – goal which he articulated in his first book, Man’s Supreme Inheritance:

I wish to do away with such teachers as I am myself. My place in the present economy is due to a misunderstanding of the causes of our present physical disability, and when this disability is finally eliminated the specialised practitioner will have no place, no uses. This may be a dream of the future, but in its beginnings it is now capable of realisation. (This quote appears at the end of his Preface to MSI)

While this goal has certainly not been accomplished as yet, I believe it’s no longer just a “dream of the future” but in fact is already starting to happen.

One of the most striking aspects of the recent revolution in Alexander Technique Directions is that not  only are they more effective and easier to use – they are also easily transferable from students to their friends and family.  They are, to use a bit of current jargon, “open source” directions.*

Furthermore, they are also being adapted by students and teachers for all sorts of “off label” purposes such as dealing with troublesome family members or co-workers, changing dis-functional patterns of thought about one’s self etc.

All these new developments originated within the platform for self observation and self discovery that Alexander created and that he, and many of his early followers, dedicated their lives to expanding and improving.

I believe it’s our primary mission today to continue that process of expansion and improvement.

*A fascinating podcast about the power of open source projects can be found here: Open Source World