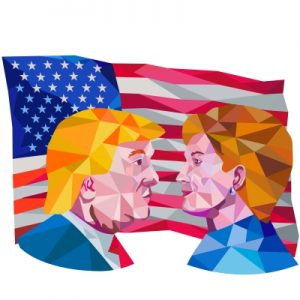 Recently I’ve been thinking about the concept of Leaning In, a phrase popularized by Sheryl Sandberg, the CEO of Facebook in her bestselling book Lean In: Women, Work, and the Will to Lead

For her, the phrase is a metaphor for being assertive and embracing risk in order to achieve the greatest level of success in the workplace. But as a teacher of the Alexander Technique, I’m particularly interested in the physical aspects of leaning in – or it’s opposite, leaning back.

Especially today when America – and the world – will witness the first Presidential Debate in which Hillary Clinton and Donald Trump go face to face on the same stage. Both candidates’ non-verbal communication patterns will be on view for all to see, including their leaning propensities.

Non-verbal patterns have been shown to be at least as important as words in influencing audiences, so the way the 100 million expected viewers react to what they see may well decide the outcome of the election.

It will come as no surprise that Trump is a big-time leaner-in.  At times so much that it has an element of aggressiveness.

Clinton doesn’t lean a lot, but when she does, it’s my impression that she leans back a bit – as if she wants to get away from her audience.  And that could explain some of her perceived failure to connect on a personal level.

(President Obama seems to hardly ever lean, but when he does, it seems to be slightly in.)

I’ll be glued to my TV this evening – 9PM Eastern time, 6PM Pacific time.  You might want record it in order to take a closer look at the candidate’s leaning patterns and I’d love it if you post what you see, either below or on Facebook.

Here is a podcast interviews I did with Imogen Ragone about the physical aspects of Leaning In: