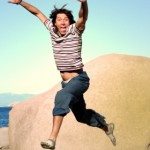 I never cared for this kind of leap of faith.

When I was in Sunday School, many, many years ago, we were given a little pamphlet about – not surprisingly! – God.  More precisely, our belief in Him (always a male, back then) and it was recommended for those who were not sure He existed that they take a “leap of faith” in order to get with the program.

I remember being very puzzled by this. First it had never before occurred to me that He might not exist and the pamphlet had the immediate effect of sowing seeds of doubt in me.

Second, I couldn’t imagine what a leap of faith would entail.  Images of jumping across a deep pit entered my mind and I decided that wasn’t something I was prepared to do just then.

Also, I would have to wait until I died to find out if my leap, even if I could pull it off, was justified and that just seemed way too far into the future.

It’s a bit ironic that as a teacher of the Alexander Technique I am always suggesting that my students take leaps of faith.  I suggest they experiment with using an Alexander thinking process (sometimes called “directions”) with as little as possible in-the-moment concern if the process will be effective or not.

A leap of faith on their part certainly, but one quite different than the one I rejected years ago in two important ways:

First, the stakes are a lot lower.  I ask them to experiment with a new thought about themselves as they move.  These results might be good, or they might not.  Either way there’s very little risked on their part.

Second, the waiting time is not dozens and dozens of years, but perhaps 10 seconds or maybe half a minute.  It’s a very, very short leap indeed.

Here’s an example of what I’m talking about that you could try right now:

Did you notice any differences in your walking when you switched back and forth?

One key part of this experiment is the lightness of your “not compressing” intent – and the sure knowledge that you’re almost certain to forget it, and than when you notice that’s happened,  you can just gently bring the intent back.  If you catch yourself concentrating on this intent, trying to hold onto it, let go of that holding and return to a very, very light – and forgiving of forgetting it – intent.

A second key part – and this is where the “leap of faith” really comes into play:  be as little interested in the results as possible – during the experiment.  The time to make a judgement about the effectiveness of this kind of experiment is after it’s over.

(In an earlier podcast,  Alexander Technique tip from a Card Shark, I wrote about this kind of self-directing process in a bit more detail.)

Were you able to utilize the process I just described?  If you ran into obstacles, what were they?  Did you notice positive changes in your walking from using this process?

I’d love to hear about your experience.