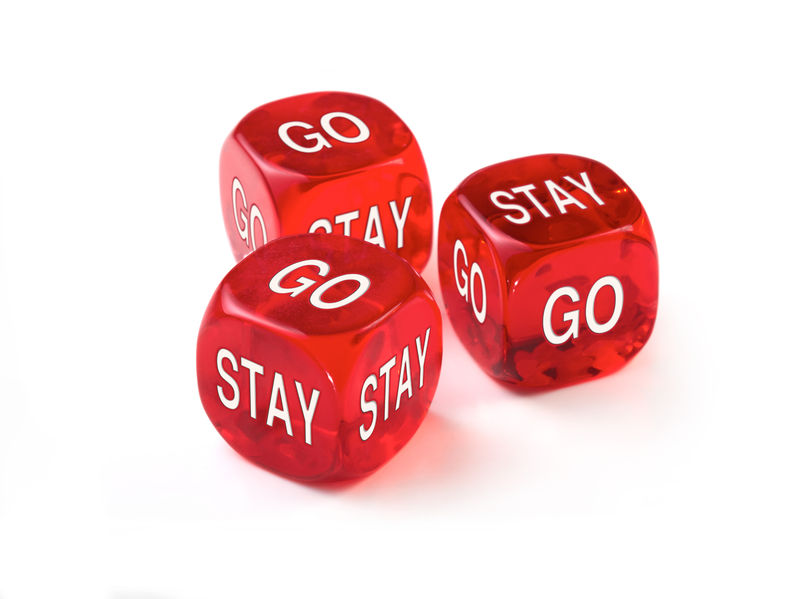 My friend and colleague, John Macy, has thought a lot about the two functions of muscles: movement and stabilization. John is an Alexander Technique teacher, a physical therapist and the owner of a Pilates Studio in Omaha, Nebraska. These are some of his insights, posted here as a guest blog.

Should I Stay or Should I Go Now?
Stability and Mobility in Movement and Life

When I was in training to teach Pilates, I was struck by how different the activities were from the  standard exercises I had been taught in sports or physical therapy.

The difference was that the Pilates activities often required me to change which part of me was moving and which stayed stable, with a strong emphasis on being able to truly maintain the stability as the main focus of the activity.

If there was a choice between moving through space with some muscles while losing the stabilizing contraction or staying stable and not moving any further, the latter was always the correct answer. No real surprise given that Josef Pilates called his work Contrology, learning to control your body and mind. What I realized, however, is that the function of stability and the interplay with mobility is often overlooked in movement training.

I have found in my practice with clients that understanding this idea can greatly increase a person’s exercise or movement ability.

First, let’s define a few terms in the context of human movement.

Stability is the ability to maintain the relationship of body parts to each other. There is static stability, as when you do a plank and hold the whole body still, and there is dynamic stability in which you keep some parts in the same relationship while other parts are moving. An example is when you keep your torso stable and aimed forward and upright when you walk across a side hill.

Mobility is the ability to change the relationships of body parts, such as when you lift your arm above your head when you reach up to get a mug from the top shelf.

Notice that you can, and often are, doing some of both when you move; some parts stay stable while others are moving.

All skeletal muscles can either hold things together or move things relative to each other (stabilize or mobilize) depending on the position you are in and how you want to move. Because of their position and connections, most muscles PRIMARILY stabilize or PRIMARILY mobilize. The ones that mainly stabilize are generally closer into the midline or center of the body or deep around the large joints to add control to how the contact surfaces of the joints come together. The ones that mainly mobilize are closer to the surface of the body and out in the limbs.

Generally speaking (some would argue too generally, but I like to think big), the muscles whose PRIMARY function is to stabilize in daily movement can be considered the core. There is debate on exactly what constitutes the core group, ,,but to my thinking that means all the way from the inside of your big toe (adductor hallicus), up the medial leg to the pelvic floor and on up the abdominals and paraspinal muscles to the deep muscles of the neck at the cranial base along with the deep muscle of the hips and shoulders.

So how does this interplay of mobility and stability play out in real life?

Think about walking for a minute. You swing the right leg forward and set your foot on the ground. Now the foot needs to stay there and not slide because you are about to put all your weight on it to swing the other leg past. Once your foot lands, you have to keep it in place on the ground using ankle muscles, the knee stays straight, and the hip has to come forward and stack the femur on the knee. The muscles have to make the leg a stable post (no change in bone relationships at the joints) so you can put your weight onto it. Now you swing the left leg past and place it on the ground in front and it’s time for the right leg to pick up and move. This means you have to pick up the foot, bend the knee and swing the hip, mobilizing (changing the bone relationships at the joints) of the various parts of the leg. But it’s not the same muscles in the leg that stabilized it that will now move the leg. Within the leg, the various muscles have different jobs, some mainly stabilizing, some mainly mobilizing, and some do a bit of both.

This variety of muscle functions is true not just in the leg but throughout the entire body. It is the constant shift of stabilizing and mobilizing that enables us to move in a controlled fashion. It follows that if we improve our control of that shifting and our ability to use our muscles for the job they are best suited for (stabilizing or mobilizing) we can improve performance.

Many of the injuries and problems I see in people related to exercise and training stem from problems in assigning the right jobs to their muscles. Going back to the walking example- think of what happens when it is time to get the weight off the back leg and onto the front one. You can use the large gluteals (buttocks) with their connections from the pelvis to the hip to push the weight forward as the lower leg pushes off the ground while you keep the vertebrae and pelvic floor stable. Alternatively, you can thrust the stomach forward, arch the back and compress the discs as you throw the pelvis to fall forward off the rear leg which you just use like a pole vaulter’s pole. Both will get your weight forward.

However, the first one is using mobilizers as mobilizers and stabilizers as stabilizers while the other has reversed the roles. If your reason for walking is to strengthen your legs for dynamic activity like lifting and squatting, then which pattern is going to achieve that goal? Clearly, using the gluteals and leg muscles to move your weight forward puts you on track for that goal.

But if you want to compress your discs and strain the pelvic floor muscles and overstretch the hip ligaments, the latter is a much more effective choice. You get to decide!

The concept of stability and mobility and the interchange and control of them is what I consider one of the primary concepts in understanding how to learn and enhance movement in ourselves and our clients.

Next time you exercise try experimenting with these questions:

This type of self-discovery and analysis, where you ask what really needs to move and should or could remain stable in any activity, is a means to really tune in on how to adapt and change your movements and exercise patterns and keep things interesting. It lets you train the body and the brain at the same time. Neural and muscular training, two for the price of one! Who doesn’t like a deal like that?

Movement is life – have some fun!