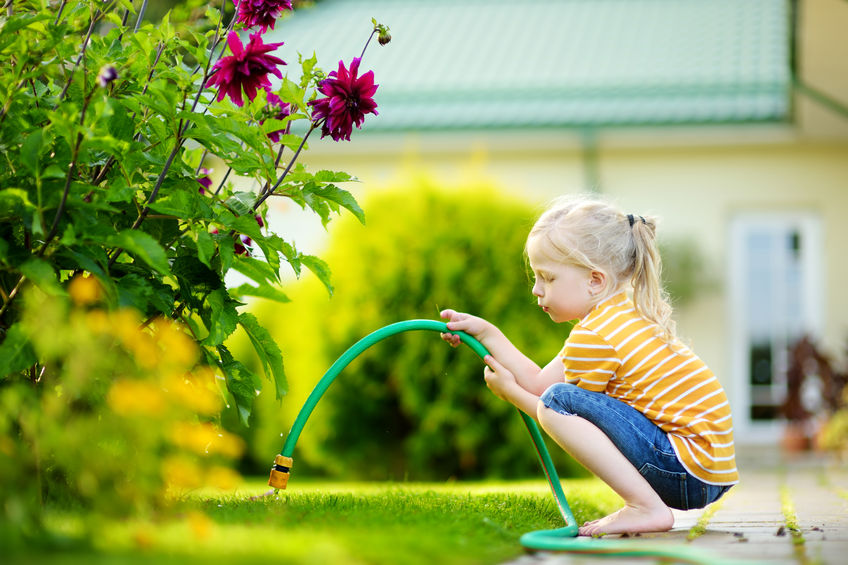 Emmet Fox was was a New Thought spiritual leader of the early 20th century and is well known for the insightful stories he told to illustrate important spiritual concepts. Here’s one that resonates nicely with basic Alexander Technique principles:

A little girl was watering her garden flowers when suddenly the flow of water stopped.  She called out to her father, who was also working in the garden, saying “The hose isn’t working anymore!  Come fix it.”

He walked over to her and gently lifted her up a bit and the flow of water instantly resumed. “Always make sure you’re not standing on the hose when you’re watering in the garden” he said and all was well after that.

Emmet Fox was of course using this to illustrate the important spiritual principle that you’re not going to get what you want, no matter how much you pray, if you’re blocking the very channel that would bring the good to you.

Anyone familiar with the Alexander Technique will immediately recognize the Alexander parallel: You can’t become freer if you persist in tightening yourself.  Put another way: You have to stop doing what’s getting in the way of change if you actually want to change. Or, to use a bit of  Alexander jargon, you have to inhibit your old way of doing things if you want to do them differently.

All of this seems pretty obvious when you read it.  But again anyone who has explored the Technique will tell you that it can be quite a challenge to implement. And not because of its complexity.

As the late Alexander teacher Marjorie Barstow used to say to groups she was teaching, “You people won’t believe how simple this work is.” She also would say: “It’s so simple it’s shocking.”

Simple and easy aren’t always the same.  We humans sometimes like to make simple processes complex, and thereby ineffective.

In the case of Emmet Fox’s little girl, had she actually paid attention to what the soles of her feet were trying to tell her, instead of putting all her mental energy on the flowers, she would quickly have solved her problem all by herself.

With us, it’s a bit trickier because the things we have to learn how to notice are often deep-rooted habits that have, like weeds, infested our garden, so to speak, in a way which makes it a challenge for us to notice.

Often our feeling sense has become, as F. M. Alexander, the founder of the Technique, liked to say, debauched.  A strong but accurate way of describing the situation.

Here’s a little experiment, inspired by Emmet Fox’s story, you can do yourself to explore the Alexander approach to making a useful change in how you function:

As you’re standing or walking, gently say to yourself: “I’m free to notice how the soles of my feet contact the ground.”  You can test the usefulness of this strategy by alternating that thought with a nonsense one like: “I’m green” and notice what happens when you shift back and forth.

You may notice a difference – but only if you keep things very simple. No extra thoughts or hopes or anticipations or judgments or analyzing of any kind!

I’d love to hear how this example of Alexander Technique self-directing works for you, below or as a comment or on Facebook.

Country music has always understood the dynamic of self-inflicted pain.  Indeed it lies at the core of the genre.  Here’s a nice example by the greatest of the Late Greats, Hank Williams: